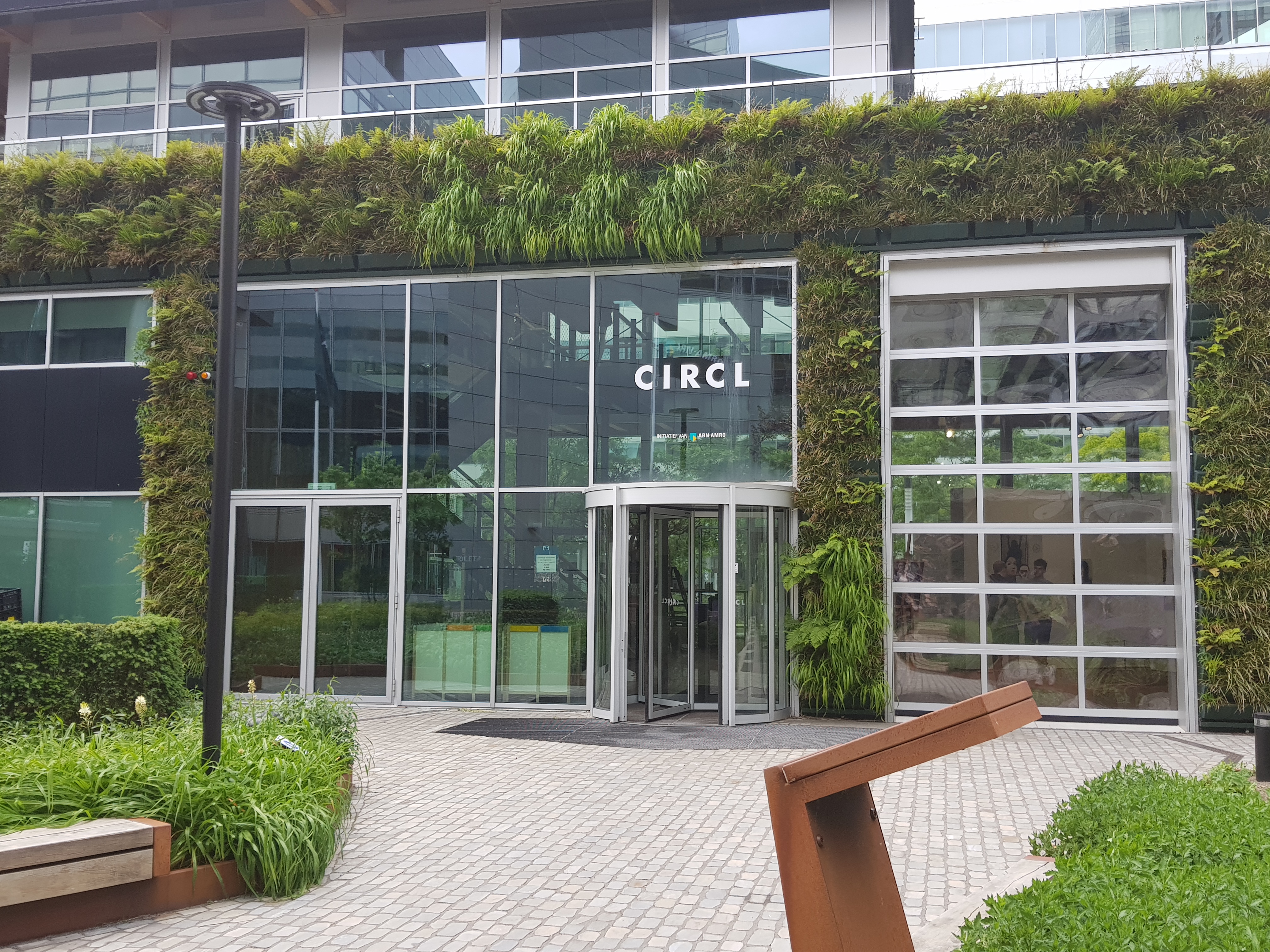 Earlier this year I participated in a fascinating tour of ANB ARMO bank in Amsterdam as part of Michael Darcy’s (Ireland’s Minister for State responsible for FinTech) – trip to Money 20/20.
I am as surprised as you are that a tour of a bank could be fascinating! Don’t let that apparent contradiction put you off from reading on.

The tour wasn’t about banking itself, but about how the bank could use its position, resources and systems for environmental benefits. 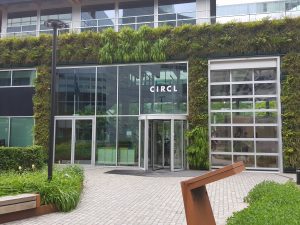 The tour was led by Richard Kooloos who is ANB ARMO’s Director of Sustainability, and the tour started with a visit to the bank’s new meeting space beside their HQ in Amsterdam. They wanted to create something more accessible and user friendly than their office block and decided to use the requirement as an experiment in environmentalism, so they built a three-story multipurpose space next door. 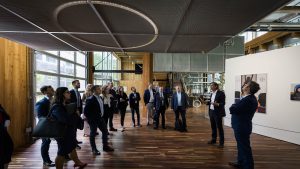 Minister Darcy (right) and Mr. Kooloos (second from right) with the EI and Irish FinTech delegation on the left

They started by setting a budget much lower than the usual cost of a building that size. This set them a challenge to make such environmental building affordable.

The entire building is built from re/upcycled building materials that had been salvaged from other buildings. It is also modular and is designed to be taken apart and can be reassembled elsewhere if they decide to move it.

Internally, they have used cost saving and upcycling ideas such as shredding stock they had of old banking clerk uniforms (I assume from the 70s? When did bank clerks stop wearing uniforms?) and using that for the heat insulation between floors.

For sound insulation, they asked their staff to donate any old pairs of jeans they had. 15,000 pairs were donated! They were also shredded and used in the walls between the meeting spaces.
In a further drive to keep costs down, they did a deal with a local elevator company. Instead of buying an elevator off them, the company installed it at their own expense, and they get paid ‘per journey’ in a sort of Service as a Service model. This also encourages people to use the stairs to keep the building running costs down, which is of course healthier too.

There is a restaurant in the building and the kitchen is leased out. Part of the lease terms is they must use 50% less electricity than a usual kitchen of its size. This has resulted in reverting to old ‘technology’ such as drying and pickling food supplies instead of freezing them.

The bank has also made the building part of the community with any local group – sports, arts, whatever able to book and use the rooms free of charge outside of banking hours. They also rotate on display some of their art collection, so the public has access to it. Mr Kooloos mentioned in the tour the art on display cost more than the building. 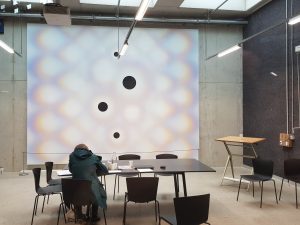 Some of the art on display in meeting rooms.

Section two of the tour led us into HQ – a more traditional banking building – grey and austere.
Mr Kooloos gave us a presentation – initially on more banking type stuff but still on the environmental theme, like their Green Bond.

Then he started to outline the banks plans on Blockchain. Usually I instantly glaze over at the mention of Blockchain, but in this instance it is where the tour got really fascinating!

They are working on a model to use Blockchain (or Distributed Ledger Technology if you prefer) to track mineral assets. The example he used, was mining copper.

Traditionally a mining company mines copper, smelts it, sells it, realises the revenue. They never see that copper again – they just mine some more to make more revenue. The company’s value is based on how much they can mine and sell.
The copper they mine is used – for example – to make pipes for a new house. At some stage in the future, that house is knocked to build something else and some or all of the copper is recycled, some dumped, nobody really knows.

In the new model, the mine retains ownership of the copper through its life. The value remains an asset for the mine company, so the company’s value continues to grow.
As opposed to selling the copper, they lease it though the value chain. When the house in our example is knocked, the mine takes the copper back and recycle it and the life cycle starts again.
The copper never leaves the value chain, it circles back to the start of the life cycle again.
Blockchain is used to track the copper through the system.

When asked in what detail they expect to track minerals, he replied ‘eventually on a molecular level’
It’s fair to say the room was stunned by this! The Minister was impressed enough to disregard his prepared speech and talk from the heart on the application of technology and technology transfer between industries for the benefit of the environment. It is of course also profitable, which is win: win. My favourite kind of business.

This tour was in June and I meant to write this blog then, but – you know – I’m busy! What inspired me to return to it was reading Leanne Kemp’s excellent article for the World Economic Forum ‘Here’s how a circular economy could change the world by 2030’
Kemp outlines similar models in the article and details the changes needed in politics and society to make real change by 2030.

If you are looking for some inspiration on how change can be achieved, I recommend reading Kemp’s article and reviewing your business model. 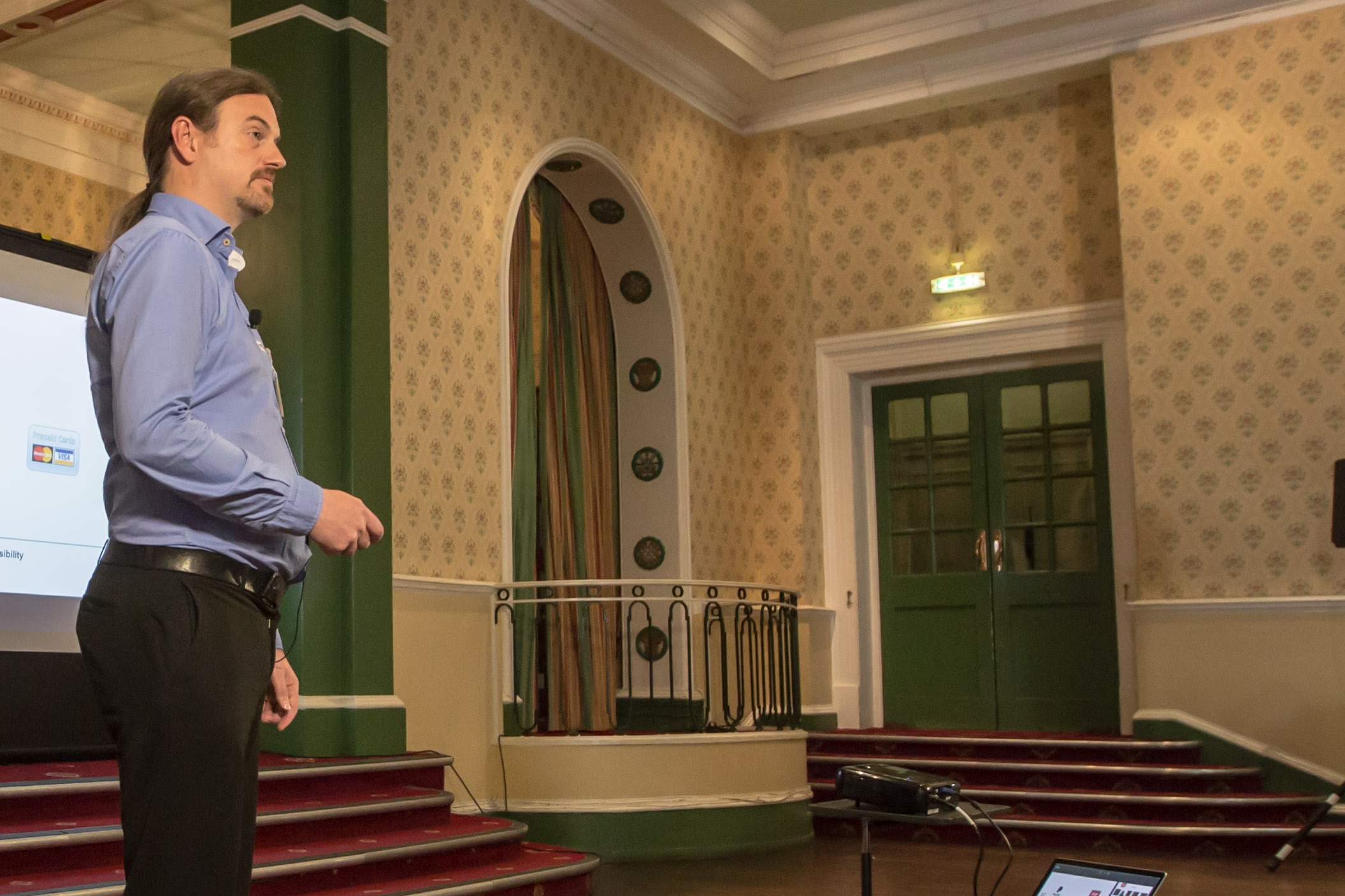 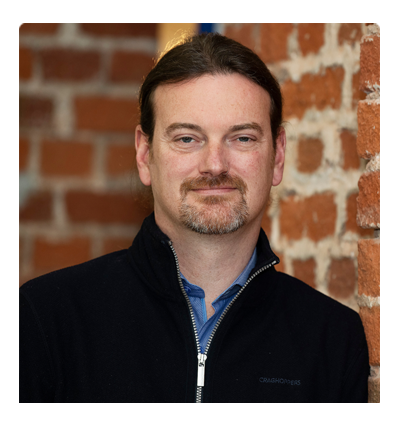